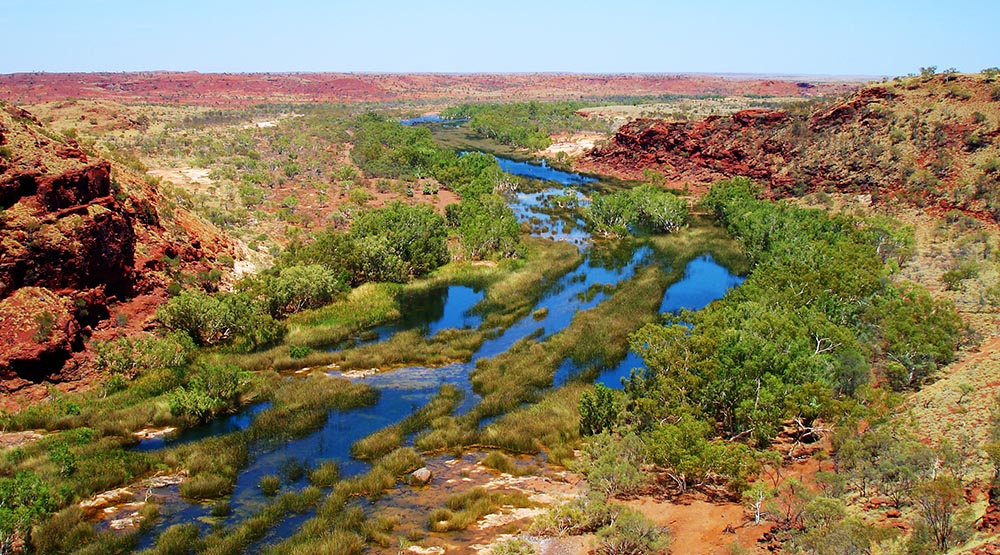 For Yindjibarndi, all creation is written in our landscape and was sung long ago filling our country with sacred meanings and deep religious significance, for in the beginning, at the dawn of time, Ngurra Nyujunggamu – the time when world was soft as clay and the sky very low – the time that others call the Dreaming – our creator Sky God, Mingkala, sang the songs from which all life and ngurra evolved.

When Mingkala made the Marrga – the creation spirits who were the first beings belonging to this country – the Marrga rose singing from the soft world after Mingkala lifted the sky and earth out of the sea.

In the Ngurra Nyujunggamu, the Mingkala, the Marrga moved about the country singing and creating everything we see in the natural world today – hills, gullies, plains, waterways and springs, birds, animals and plants. Their activities and every place is recalled in our inherited Yindjibarndi stories and our sacred Burndud songs that have been passed down to us by our voices and memories through 2,000 generations.

The Ngaardangarli (Aboriginal people) were the last to be created.
At first, all Ngardangarli were the same. They spoke only one language; they had no responsibilities for country, no culture and no Law.

In this land where song began, our ancestral Yindjibarndi stories tell us that Mingkala first chose birds to be the managers of everything, but they proved unworthy.

Mingkala and the Marrga spirits believed that everything needed had been created. They wanted to pass on responsibility for the management of their great created world, and decided that Ngaardangarli were their choice for custodians for the Ngaardangarli might be the ones who would prove most faithful to the Law and the most capable in carrying the powers of decrease and regeneration necessary to maintain equilibrium between everything.

Accordingly, they gathered all the Ngaardangarli together at a hill on the Fortescue River in Gregory Gorge called Gumunha, and told the Ngaardagnarli that the Marrga’s time was coming to an end, and that they wanted to pass on custodianship of the land, culture and their Birdarra Law to the Ngaardangarli who showed the greatest character and spirit.

To test the courage, faithfulness and character of the Ngaardangarli, all were put through the Birdarra Law ceremony. All of those gathered were tested and then divided. Each group was given a separate language and awarded responsibility for separate territories that they were to care for, and which would then sustain them.

After the Birdarra ceremony, Mingkala selected the Yindjibarndi to be responsible for carrying the Birdarra Law and the Burndud song cycle of creation because Yindjibarndi showed courage and discipline; they didn’t complain about pain, and their wirrba (spirit) was most open to Mingkala.

When Ngurra Nyujuggamu was completed, the world became hard, and Mingkala and the Marrga disappeared but we believe they are still present in our ngurra.

To this day, at Birlinbirlin, near the first initiation ground, the key events of Birdarra Law and creation can be seen in the stone – the circular Burndud dance ground, the Galharra that orders our relationships, the Sun, the Moon, the Morning Star, the Milky Way, and Nayalyu the demon spirit.

We still respect the borders of each Pilbara nation’s Ngurra. Our territories are known and mapped by our different languages, and the cultural stories, songs, and ritual practices that guard, enrich and sustain the Ngurra we were given by Mingkala at the beginning of time when the world was soft. 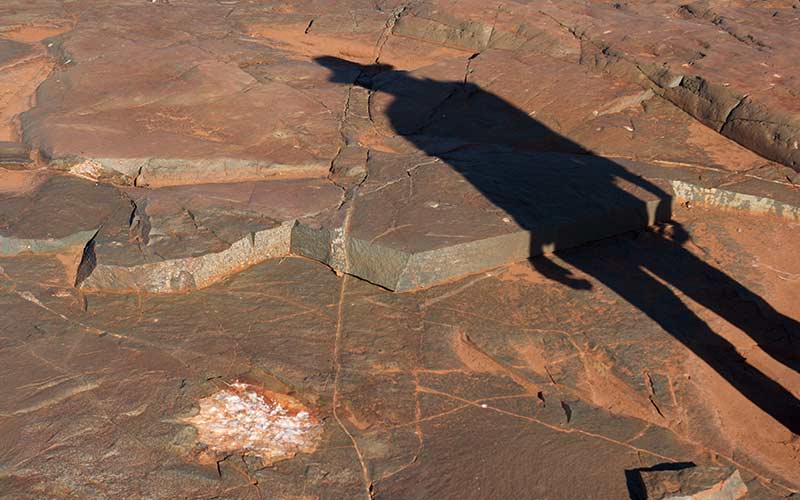