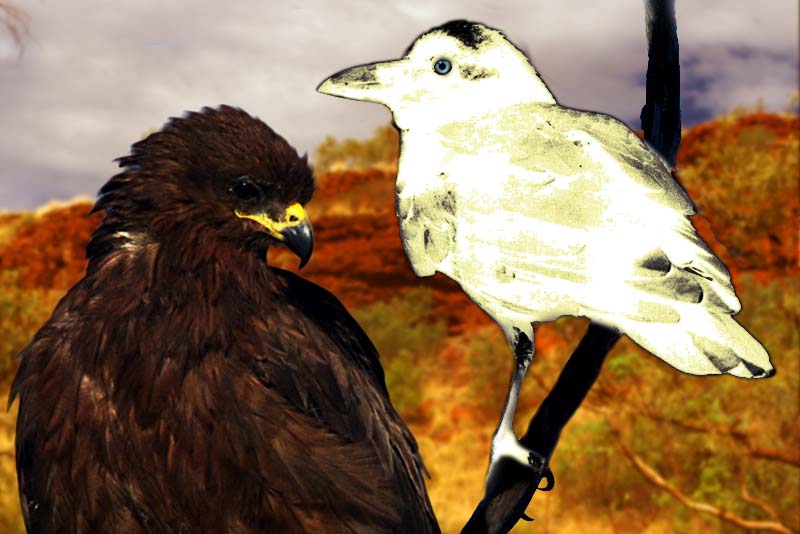 A Yindjibarndi story as told by Michael Woodley.

A long time ago at the beginning of the world there lived the Eaglehawk, Black Kite and Crow.

In the creation times the crow had white feathers.

Eaglehawk, who was master of the land, was the husband of Black Kite and the uncle to Crow.

With his wife Black Kite and nephew Crow, Eaglehawk roamed the country from waterhole to waterhole, hunting and gathering food.

The rock wallaby was one of the main delicacies for Eagle – every time he and Crow would go hunting, they’d never come back without a rock wallaby.

Over the years, Crow took a fancy to his uncle Eaglehawk’s wife.

Now, in the Law of the land, Black Kite was the auntie or Nyirdi (mother-in-law) to Crow, and it was forbidden for them to speak or even make eye contact.

But Crow’s desire for his Nyirdi was too much to resist.

One day, Crow told his uncle Eaglehawk that he saw a big fat rock wallaby in a cave in the hills close to their camp and they left together for the hunt

They came to the hill and when they reached the cave on the hilltop, Crow said to his uncle, “The rock wallaby is inside uncle, go in and have a look!”

Once his uncle Eaglehawk was inside the cave, Crow blocked the entrance with rocks, trapping his uncle. Then he ran back to the camp to steal his uncle’s wife. Several weeks passed, and Eaglehawk was still trapped in the cave while Crow was traveling the country with his Nyirdi, which was forbidden.

Eaglehawk was trying to find a way out of the cave. He saw some ants making their way in and out of the cave, and Eaglehawk followed the ants to a small entrance where he changed himself into an ant and escaped. 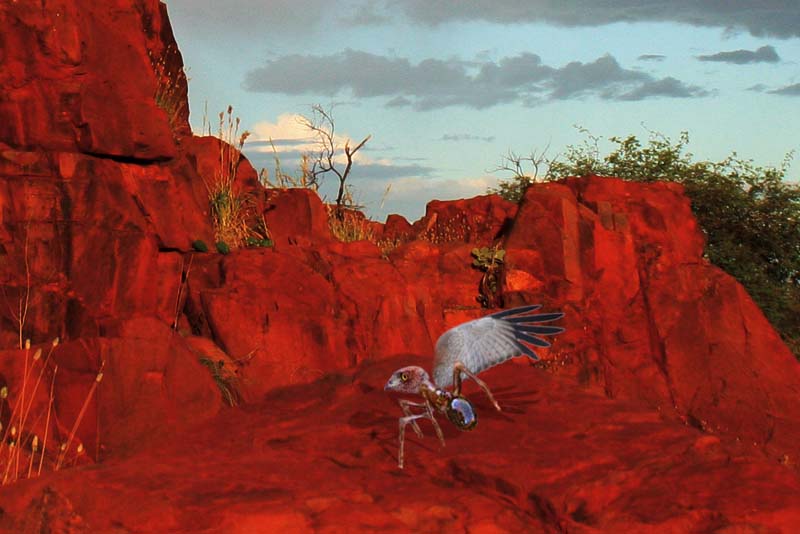 Eaglehawk stood on top of the hill looking out across the lands for his nephew the Crow who had deceived him and stolen his wife.

Eaglehawk then grew wings and launched himself into the sky and flew around searching far and wide.

He saw smoke in the distance, and as he approached he saw his nephew and his wife eating by a waterhole.

Crow was laying under a tree in the shade while his Nyirdi the Black Kite waited on him.

Eaglehawk came down swooping angrily on his Nephew. Eaglehawk grabbed his nephew by the neck and dragged him through the black ashes of their fire, until all Crow’s white feathers turned black.

Eaglehawk told Crow that because of his crime he would now become a scavenger and would forever more feed on garbage, and his eyes would always be buwa (full of pus), and he would always be known as the greedy – a despised one.